Last week we returned from our family vacation to Florida.  I will blog about that later.  While we were in Florida, we decided to take the kids up to Clearwater to see Winter the Dolphin.  If you aren't familiar with Winter's story, watching the movie, "Dolphin Tale", will familiarize you with it- although as we found out when we were there some parts were not true.  A quick synopsis: when Winter was about 3 months old, she was found by a fisherman off the eastern coast of Florida, tangled in a rope from a crab trap (not how it was depicted in the movie).  This was in December- which is how she got her name, Winter.  She was transported to the Clearwater Marine Aquarium (on the otherside of Florida) where the veterinarians and trainers nursed her back to health.  Unfortunately, the blood flow to her tail was cut off for too long, and her tail flaked off (in the movie it was amputated).  Winter learned to swim like a fish or a shark, moving her body side to side.  This caused harm to her spine and backbone, so 2 men from Hanger Orthotics (the same company that makes Juli's ankle braces- pretty cool, huh) set to work designing Winter's tail (in the movie, the 2 men were combined into 1 man played by Morgan Freeman). 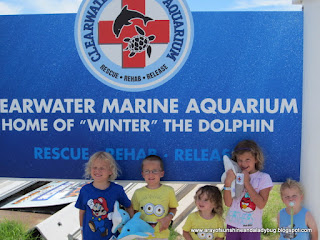 We arrived at Clearwater Marine Aquarium just after lunchtime with the kids.  It was hot and humid, and it had stormed for most of the hour long drive up there.  The kids were beyond excited.  Since we didn't know what day we were going to go to the aquarium, we hadn't bought tickets online.  For those of you who are thinking of going there, buy tickets online to avoid standing in the hot and sweaty line.  Once we had our tickets, we headed up to the 2nd floor to see Winter.  Unfortunately, it wasn't Winter's turn in the big dolphin pool, but one of the trainers pointed out which area she was in.  It was crowded at the time, so we didn't get to see her as closely as we had wanted.  We took the kids around the rest of the aquarium (FYI, if you are expecting an aquarium like the Shedd- don't.  It is small and NOT air conditioned).  The kids got to touch sting rays, see sea turtles, sharks and other sea life.  Then we headed back upstairs for one more attempt to see Winter.  The crowds had thinned by then and we were able to see her better.  She even splashed the water a bit because she wanted to go into the big dolphin pool.  Then, we explored the aquarium some more- touching some more sting rays, and we also got to look in the hospital wing where they were working on a large sea turtle.  Then, we stopped in the gift shop to let the kids pick out something.  The 3 big kids all picked a Winter without a tail, Juli chose a starfish and Brendan chose a shark.  From there, we hopped on a trolley to take us to another part of Clearwater to "Winter's Dolphin Tale Adventure", which took you through the movie.


This part was my favorite. 1. Because it was air conditioned (yay!), 2. because it took you through parts of the movie with real props, 3. because there were games for all the little kids to play and you didn't have to pay for them, & 4. the hurricane experience- you get to walk through Hurricane Leroy from the movie- it was so cool! Noah and Rori went through it several times as well.  Then, Juli and Brendan started to meltdown and we had to leave before we got to see the whole thing (bummer). 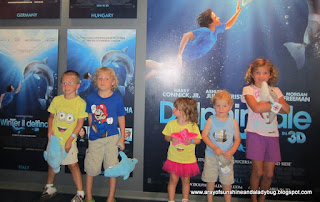 The reason I am blogging about this first, is because of the impact the visit made on Noah.  Everyone knows about Chili Dawg and his amputation.  Ever since then, Noah has been extra-sensitive to animals and their injuries.  After seeing Winter, on the drive back, all Noah could do was ask question after question about Winter and her missing tail.  He has carried his dolphin everywhere we go and tells everyone about Winter.  He has watched "Dolphin Tale" many times, and today, I think he checked out almost every single library book on dolphins.  Every morning, I have to go to seewinter.com so that he check out what Winter is doing on the "Winter cams".  Can you say obsession? 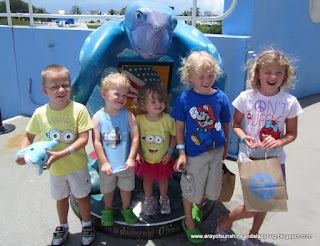 So, even though the adults were hot and sweaty, and not as impressed as the children were, I think it was a good visit that the big kids will remember for a while.  She sure is an impressive dolphin and has overcome quite a lot.  If you haven't seen the movie, I recommend it.  It still makes me cry when I watch it.