This year, I had the opportunity to be a mentor to a new teacher.  I was chosen to mentor a brand new teacher, fresh out of college.  Her name is Elise, and she is a fantastic human being.  She is sassy and bright and very excited to help students learn.

Mentoring was a two way street.  I helped her and she helped me.  She shared new labs, worksheets, videos and powerpoints.  She also introduced me to the world of snapchat.
She is one of the hardest working new teachers we had this year (actually all of the new science teachers we hired this year are phenomenal- that's my shout out to Farias and Woods).  She didn't take a single day off, not even when she was sick!

Elise, you were a joy to mentor and while I don't think I really did much to mentor you, I want you to know that I am so very proud of you and all you accomplished this year!
Posted by Jenna at 9:19 AM 1 comment:

Migraines and Piercings, Oh My...

About 3 months ago, my good friend from school, Bernadette, showed me her Daith piercing. I asked her why she decided to get pierced. She told me that she had been doing her research (and if you know Bernadette, she never does anything that she hasn't fully researched) and read several articles that said Daith piercings can help alleviate migraine headaches.

Immediately my spidey-senses came alive. I have had migraines since I was 14 years old, which means I have had them for over half of the time I have been alive. I began doing some research of my own.  Last month, I asked Bernadette how it was going migraine-wise, and she said she has had 2 migraines in 3 months as opposed to 2 migraines a week.  So, I talked to Ryan about and he gave me the go ahead to try it out.  At this point in my migraine journey, I am willing to try anything to help me out.

So, I found a place that did Daith piercings and had good reviews (I didn't want an infection and to have my ears fall off) and scheduled my piercing for Friday the 13th. The day arrived and I arrived for my piercing. A man named Bear was my piercer and he was very kind and friendly, I could tell he knew what he was doing. He walked me through the procedure and opened all his instruments in front of me to show me they were sterile. Then came time for the piercing. I will be honest with you, I wasn't sure how much pain to expect, but it barely hurt at all. He did a great job and now I am sporting these for the next few months until they are healed and I can pick out prettier jewelry. 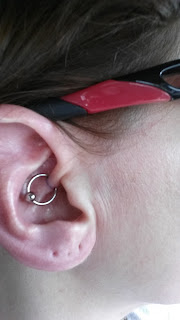 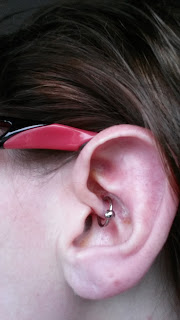