My Punkin Horsie Is 5 Today...

Five years ago today, my baby girl came into the world.  Little did we know that she was going to take us on a whirlwind ride of doctor's visits, sleepless nights, Early Intervention, and the other side of special education.  But, you know what?  I wouldn't change it for anything.  This journey has made me a better person and a better mom.  Sure there have been plenty of tears shed, tempers have been lost, tantrums have had to been managed, but it is all worth it.

Juli still doesn't have a diagnosis.  They can't tell us why she doesn't like to eat, although that has gotten much better from when she was an infant, and now that she can tell us when she's going to projectile, things have gotten a lot easier (it breaks my heart when she has to tell us though).  They don't know why she is sensitive to certain stimuli and will just start screaming uncontrollably, and when you ask her she tells you she doesn't know.  But it has helped me as a mom.  Before I had kids, I was one of those people who would see a child melting down out in public and think, "that kid is a brat".  Having Juliana, and not knowing what will set her off when we are in public- sometimes it's crowds, sometimes noise, I have been that parent that I know is being judged as "having a brat".  But here's the thing, my daughter isn't a brat, she comes from a home where there is discipline.  Sometimes something sets her off and I am the parent doing the "walk of shame" trying to leave the store as quickly as possible to get her to a place where she feels safe again.  And once she feels safe again, it's all worth it, because she crawls into your lap, puts her arms around your neck and says, "I so sorry Momma. Me love you so much."

I never thought I would have a daughter who was a girly-girl.  I am as far from a girly-girl as you can get.  In my closet, there is one dress hanging there, and it's the one I borrowed from my sister.  In Juli's closet, there is an endless supply of dresses.  If she could wear a dress or skirt every day, I think she would, and the fancier the dress, the better.  Some mornings it takes her forever to figure out which dress she wants to wear, and if she's like this at 4/5, what is she going to be like as a teenage girl?!?

She has 2 favorite movies at the moment: Monsters University and Frozen (shocker).  I think we have watched Frozen at least 16 times, and she knows all the words to the songs in the movie.  Her stuffed Sully's are her favorite sleeping buddies, although if I would let her sleep with her Anna & Elsa dolls from grandma, I'm sure she would.

A friend of mine passed on a bike with training wheels to Juli a few weeks ago. Even though she can barely reach the pedals, every day after I pick her up, if it's not raining, she is on that bike riding it all over the sidewalk.  She loves to be outside like her older brother.  If she's not on her bike, she's either blowing bubbles, drawing with sidewalk chalk, or playing on the swingset.

Juli has a good memory.  She still asks about Finchy- when is he going to come home from the vet, or if he is really in Heaven.  She asks if he is still guarding her door at bedtime.  She still asks Ryan if he "could not pass out again" like he did at the Enchanted Ball back in February.  She tells him that if he does we have to "call 1-1-1" and that he would have to "go to the hosibal".

This past year, she has made some big strides in preschool.  She can write her name.  She knows the alphabet.  Her speech has gotten much better.  She even graduated out of her ankle braces and night splints and now you wouldn't know that she wears orthotics, because her shoes hide them.  She's learned to hop on one foot a few times when she holds onto the wall and she is so very proud of herself for accomplishing that.  In swim lessons, she no longer cries to be without Momma, and last week she jumped in all by herself with no one holding onto her hands (a HUGE accomplishment).  I couldn't be anymore proud of her than I already am.

Happy birthday, Juliana!  We love you to the moon and back! 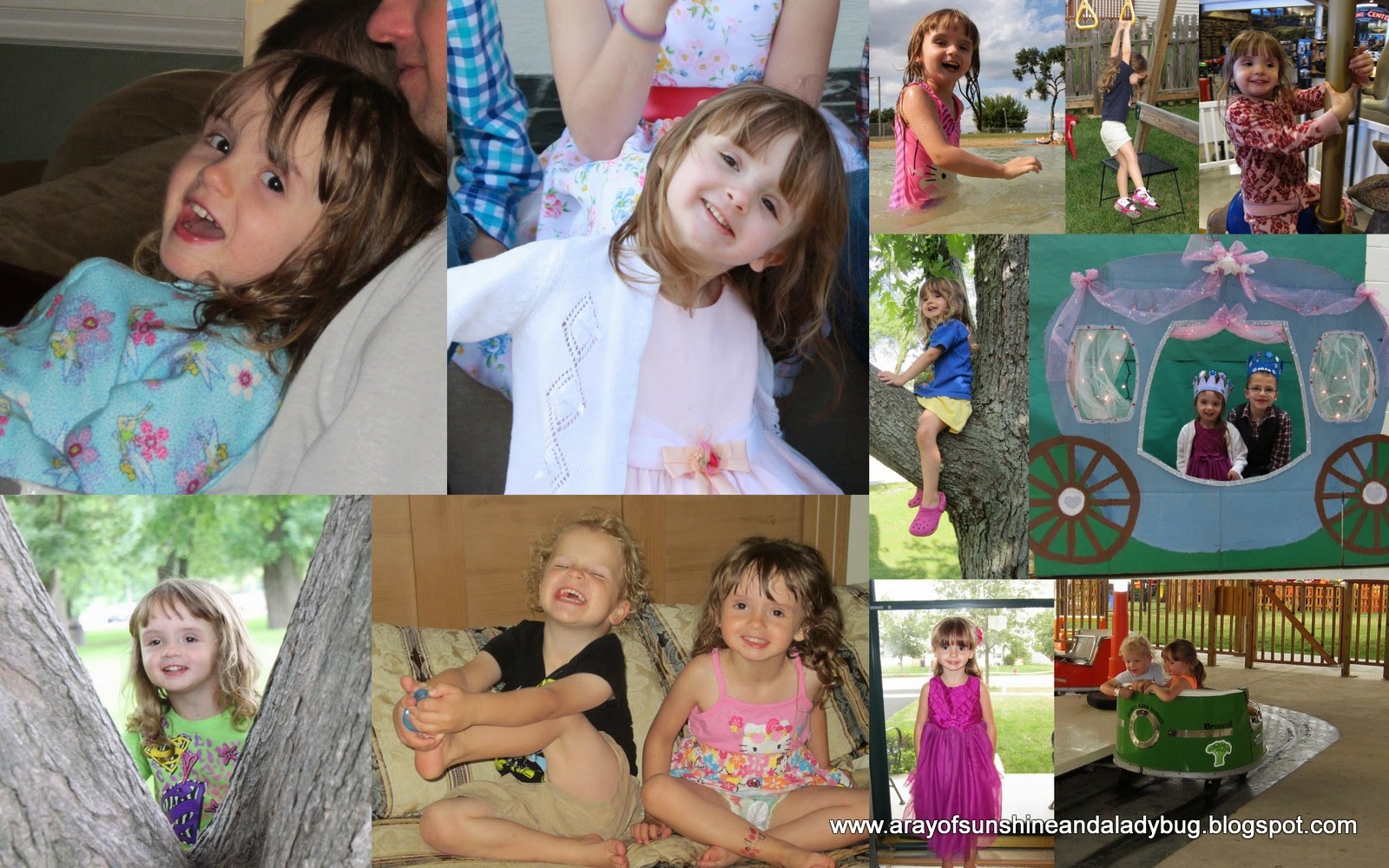