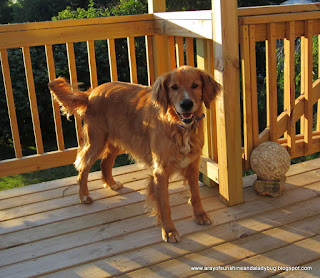 I think Buster is trying to kill me.  Just kidding...kind of.  Buster has had a lot of energy lately, and Finchy hasn't wanted to play with him (we are pretty sure that Finchy has intestinal cancer, but Ryan and I don't want to do the ultrasound to confirm it and he isn't in any pain that we can tell right now).  So, I have attempted to rollerblade with him.

Chili Dawg and I rollerbladed together a lot, before his cancer struck.  He knew how to pace himself and once we got going, he just knew how to do it.  It was like he was "born" to skate with me.  Finchy and I NEVER skated together- Ryan has to skate with Finchy.  Finchy has no idea how to pace himself and as soon as Ryan gets the leash on his harness, Finchy takes off like some sort of demon is chasing him.  And Finchy is fast.  Super fast.  Even now, at 10 years old, he is still a ridiculously fast dog.  For half of the trip, Ryan would be pulled at break neck speeds around our subdivision, and then Finchy would "wilt" and Ryan would practically have to walk back home.

But back to my Buster story.  The first time we tried, Buster freaked out at the end of the driveway and just stopped.  I fell and rolled.  I reached for Buster, to pet him and let him know that it was okay, and he cowered like he was afraid I was going to beat him (confirming our suspicion that he was abused).  I decided to go slowly with him and we found our rhythym.  The second time, we were going fast.  He remembered what we were doing, and there was no freaking out at all by him.  I was thinking to myself, "Wow, this is just like when I skated with Chili Dawg..." until all of a sudden, Buster stopped in the middle of the road and I flipped over him and went down (it was on Thanksgiving, so there was no traffic on the road or anyone outside).  I look down and my hand is all bloody, my elbow is bleeding through my shirt and I hurt a lot.  Of course we were far from home and I didn't bring a phone with me.  So, I sort of hobbled/skated home, with Buster trotting next to me nuzzling my hand with his head.  When we got home, I showed Ryan my wounds and looked down and saw a bloody footprint on the tile.  We realized that Buster was also bleeding, but he had never yelped or limped to show me that he was also hurt.  We think that the reason he stopped in the street was because he stepped on something sharp, cutting his pad.  When a dog cuts their pad, it takes a while for it to stop bleeding.  Our dog styptic didn't work, so we took turns sitting on the floor with him, keeping pressure on his pad.  Then, I cleaned myself up.  I don't know if we will try skating together again.  I know this time wasn't Buster's fault, but I was sore for several days after this fall, not to mentioned bruised and scabby (yeah, that means covered in scabs).
Posted by Jenna at 11:01 AM 2 comments:

Friday night, I logged into facebook, and again saw the words that I have come to loathe since becoming a teacher: "RIP Danny".  I have had several Danny's, but there is one in particular who was extremely special to me.  My heart sank as I made my way to his facebook page and saw post after post from his friends about him being gone.  I composed myself and then left, because I had a thing to go to and unfortunately had to break the news to my co-teacher later in the evening.  She was just as heartbroken as I was.

Let me tell you a little bit about this kid.  I had Danny as a sophomore in Chemistry.  The first day of school he had that shaggy hair style that has been popular, bright blue eyes, a smile that lit up the room, and he had this attitude where he didn't care what other kids thought about him.  My first thought was, "here's a kid that I'm going to have to win over", but to be honest, it wasn't hard at all.  While other teachers had trouble with Danny, I had no problems with him.  He was polite and respectful to me.  When other students were disrespectful towards me, he quickly stood up in my defense.

Danny didn't always make the right choices.  The day I had to write him up in class was one of the hardest things I had to do, but he and another boy almost came to blows and I can't have that happening in my classroom.  Another area Danny struggled with, was drugs.  His junior year (when he met my co-teacher, Lisa, and she grew to have the same bond with him that I did), he would share with us his struggle to stay away from drugs, but how they always called him back.

Danny's senior year, he came to visit us as soon as he got out of rehab.  Instead of taking the hour long lunch privilege he received as a senior, he chose to come to our classroom and sit and work on his homework.  He would tell us about how much he loved his family and his plans to one day become a police officer.  He really wanted to get clean and stay clean.  He spoke to us about how he could hear heroin calling to him and how it was a struggle to resist answering the call, but he was resisting it.  Right before Christmas, he came to see us and told us he had screwed up and failed his mandatory drug test.  After Christmas he would be returning to rehab.  I gave him a hug and told him I knew he could do it.  He got out of rehab, and I started looking for him in the hallways, because he ALWAYS visited us.  I ended up messaging him on facebook and found out that he wouldn't be coming back to South, BUT he would be there for graduation.  On the seniors' last day, we had an all-school assembly.  I was stationed on the second row and I searched and searched the crowd of seniors until I found him.  We made eye contact and I waved and smiled at him.  He mouthed "I'm coming to see you after" to me, but they wouldn't let any seniors into the building after graduation practice.  That was the last time I saw Danny.

I prayed for Danny every day of his senior year of high school.  I prayed for him that he would beat his drug demons and get his life straightened out.  I know Danny was getting his life straightened out.  I have a few regrets.  1) I stopped praying for Danny after he graduated-I feel so guilty about that.  What if I had kept praying?  Would things have turned out differently?  2)  I told him his sophomore year how special he was, but I never told him again.  3) I wish we had had one last conversation before he was gone, even if it had just been on facebook.

Tomorrow is Danny's wake, & I am dreading it.  Teachers aren't supposed to have favorites, but Danny was definitely one of mine. Lisa and I will go say goodbye to him together and make sure his family knows how special he was to two teachers at South.  Today, Danny's girlfriend came into our classroom to make sure we knew when Danny's wake was and to ask us to go to it because we were his favorite teachers.  At that moment, I lost it in front of my third period class.  Why did I stop praying for him?

Here are 2 pictures of Danny that I got off of his facebook account.  One is from graduation, and the other one shows his smile; it is how I remember him the best. 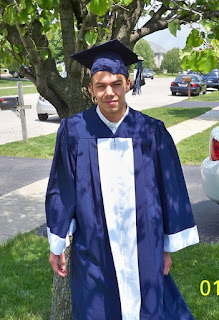 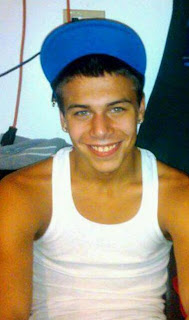 Rest In Peace, Danny.  You will be missed.