A Final Tribute To My Special Friend...

Ever since we had Noah, Ryan makes a DVD of all the videos we record of the kids and dogs from the year and then we send them to all our family members scattered across the country.  This year, Ryan said to me, "I want to end the DVD with a tribute to Chili Dawg".  I told him I wasn't ready to go through all of the pictures of him yet.  I am healing, but I have not reached that part of the journey yet.  Don't believe me?  I have a box of photographs that I ordered before Chili Dawg crossed the Rainbow Bridge that arrived after we put him to sleep.  It is still sitting in the same spot in our bedroom and hasn't moved or been opened yet.

My loving husband understood what I was saying, and sat down at the computer for several days and pulled pictures of Chili Dawg from the 8.5 years that we had with him.  He had only one request of me- I had to choose one of the songs that played in the video.  I didn't want to do that either, but the day came when Ryan forced my hand and I chose a song by Jason Castro (the kid with the dreads from American Idol), and Ryan chose the other song also by Jason Castro.

I know many of you are tired of me writing about Chili Dawg, and that is fine (that's why the heading says "a final tribute").  There are just a couple more things that I would like to share about him before we begin the new year.

Several people expressed concern that we amputated his leg, saying dogs are meant to have four legs.  We learned through this journey, that as they say on the tripawds website: "dogs are made with 3 legs and a spare".  Since Chili was only with us for a short 3.5 months post-amputation, these "doubters" did not get to see him on his three legs, so I want to share a video of him two months after his amputation.  I don't think he looks like he's having a hard time, do you?


I realize that Chili Dawg was not my whole life.  However, he gave me a gift when he broke me out of my depression after my brain injury.  He was my special companion, my heart dog.  There will never be another one of those.

Today marks four months since Chili Dawg left us, and the last thing I want to share is the video that Ryan put together to remember Chili Dawg.  I think he did a really nice job, he even included my parents' Fred the Beagle & Jaime & Bill's Princess Leia in it who crossed the Rainbow Bridge before Chili Dawg.  So, sit back and enjoy the final tribute to my special friend.

Today is Ryan's birthday.  He claims he's a "Fall baby", because Winter doesn't start until December 21st.  He will argue this point with you until you are blue in the face, so don't even try to explain to him that he's not really a Fall baby.

There are many reasons why I love my husband.  Here are just a few.

5) The man can cook!  Have you ever had his Green Burritos?!? I could eat those every week and never get tired of them.

4)  When we found out in May that the Chili Dawg had a cancer that was fatal, he still made the decision to amputate his leg, knowing that was what I wanted to do, but was afraid to say because of the cost. Then, in August, when we had to put the Chili Dawg to sleep, he made sure the paperwork was filled out so that I got Chili Dawg's ashes back.

3) He has a work ethic like no other (which is good and bad at the same time).  Three days a week he gets up at 4 AM to work out or go for a 5 mile run.  I prefer the comfort of my bed too much to get up that early to workout.

2) He is most content staying home with the family (again, good and bad at the same time, because I think he may turn into a hermit if I ever die and the kids grow up & move away).

1) He is an excellent dad.  He took the day off to take Juliana to the cardiologist, and also was able to make it to Noah's preschool program afterwards.  On Sunday when Noah desperately wanted to have a picnic for lunch, he set up a picnic lunch in the living room with the Polar Express on.

My list could go on and on, but I think you get the point.  Happy Birthday, Ryan! 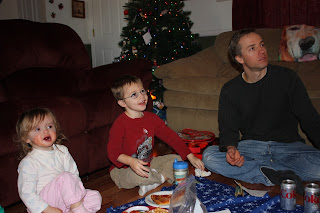 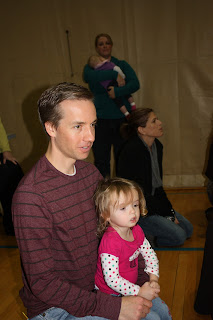 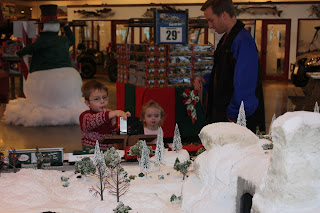 The last 2.5 years have been a bit draining both emotionally and physically.  Juliana has had a lot going on health wise, and then Chili Dawg was thrown into the mix this past year.  When we lost him, things just seemed to drain me even more.  Going into this month, I wasn't looking forward to Christmas.  I tried to get into the spirit for my kids.  Noah is looking forward to it so much.  He picks the story about Jesus' birth almost every single night.

This week, things stepped into high speed.  Ryan went out of town.  Juliana had her re-evaluation for physical therapy.  I didn't even think about it, because she was discharged from PT back in April, she didn't qualify for it when she was re-evaluated in July, so I didn't even think I should consider it when time came for it this month.  Juli requalified for PT.  It's not a bad thing, I know.  She's going to get the help she needs, so hopefully she won't need it later in life.  It was just one more thing added on.  Tuesday night, I was pretty bummed.  I stayed up later than normal, having a paper grading fiesta (the end of our semester is the 22nd, so I have to stay on top of my grading right now).  When I finally went to bed, I was just drifting off to sleep, when a cry made me sit straight up in bed.  I stumbled into Juli's room and was hit by THE odor.  I started to call for Ryan, because I needed backup, and then I realized that I was alone.  I wanted to cry, because the vomit went from one end of the crib to the other, all over the bumpers, the sheets, blankets, and all over Juliana and her hair.  The saddest part?  She was crying and was sound asleep.

I stripped as much off her crib as I could with her sleeping, got the washer started and a bath ready.  Then I took her temperature and woke her up.  She had a fever of almost 103 and then she began to wail.  I gave her the world's quickest bath to get her as clean as I could and then got her into new jammies and remade her crib (this is where it would have helped to have Ryan home).  Then, I went downstairs, turned on my laptop and wrote my subplans for the next day.  I finally got to bed almost 2 hours later, and of course neither kid slept in the next day.

Why am I telling you all of this?  Because it sets the stage for what I am about to write next.  I had originally taken Thursday off (so, yes, I had Wednesday off with sick Juliana, and Thursday off) because Juliana had a cardiologist appointment and Noah had his preschool program duirng the day.  Both were at times fairly close together, so Ryan also took the day off (yes, he came back into town after the puking was over).

Ryan took Juliana to the cardiologist, and this is where the Christmas surprise comes into play.  I was on my way to Noah's program with my mom, when my cell phone rang.  Ryan told me that Juliana's heart no longer had any holes in it, it wasn't enlarged anymore, and they didn't see any evidence of hardening either.  I cried a bit in the car.  Juliana doesn't need to see the cardiologist anymore.  We get to cross this doctor off her long list of doctors now (don't get me wrong, we LOVED Juliana's cardiologist, but heart problems are scary)!  That is quite a Christmas present.  As a bonus, Ryan and Juli even made it on time to Noah's Christmas program too, and Juli was very proud to see her brother on stage singing and dancing. 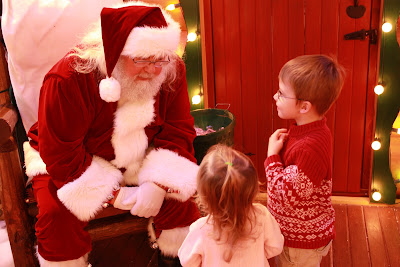