"Mom, your lazy," said Noah.  Any normal day or week, I would have brushed off the comment, but Friday my response was instead to burst into tears.  Why, you ask.  Well, Ryan flew out of town Sunday afternoon.  Monday morning, Noah woke up having breathing problems.  I took him to the doctor, he had a respiratory virus.  Tuesday morning he woke up having even more difficulty breathing, but it was too late for me to call in, AND to top things off, I was being observed in my classroom by my new boss (Tino, man I miss you).  I called my co-teacher, and explained the issue, and she was quick to say, "Just do a half day, I can teach our afternoon classes."

Anticipating that I would need to stay home on Wednesday, I wrote subplans.  Smart decision, because Tuesday night, Juli began to run a fever of 103.5 degrees, with a cough that hurt me to listen to her.  I was up with Juli, rocking her and trying to comfort her, until 4 in the morning on Wednesday.  Noah was starting to improve on Wednesday, so I planned on sending him to school on Thursday.  Juli's fever was still going strong at 103.5 degrees Wednesday night, and we spent another night rocking while she moaned and cried pitifully in my arms until 4 in the morning.  I took her to the doctor's on Thursday where our awesome pediatrician tested her for all strains of the flu (she was negative).  He determined that she had a nasty virus, but because of her febrile seizure almost 2 years ago, he was concerned that her fever wasn't going down.  He gave her some medicine in the office and gave us a cough medicine to help her sleep at night.  Thursday night went a little better, although her fever was still 103.  I only got up with her 3 times, BUT the Carbon Monoxide detector went off in between that- awesome, I know.

So, by Friday night, I was on the ragged edge since I averaged 3.5 hours of sleep a night maximum, or as I told my co-teacher, "I'm on the slippery slope to insanity".  When Noah told me I was lazy, that was something I did not need to hear at that time.  We were preparing to go to the Mother/Son Dance at his school.  When we had signed up 2 weeks earlier to go, I had been excited, but at that moment on Friday, I was tired and would have rather gotten in my pj's and headed to bed.  Instead, I was moving a little too slowly for someone to get my shoes on to go to the dance.

After seeing how upset he made me, Noah immediately apologized and burst into tears.  I knew he hadn't meant to hurt my feelings, but I had been overwhelmed by the week of being a single parent of 2 sick children and having very little sleep or adult contact.  We did go to the dance, and we had a pretty good time.

When we got there, we were given 2 green bandanas to wear- when they called our color we could do the obstacle course.  Some of the mom's were complaining about "ruining their hair" by wearing a bandana, and Noah told me I didn't have to wear mine on my head like he was, but I told him I didn't care.  We had some dessert at the dessert table, got our pictures taken together by the photographer (Noah will get those later), and then we made our craft- a drawing that will be turned into a magnet.  Then, I dragged Noah onto the dance floor and made him do the "Cha Cha Slide" with me.  He ran around with some of his friends for a little while and then he came and found me and told me he was ready to go home because he was starting to wheeze.  Ryan took our picture when we got home that night- I look tired, but we did have a good time. 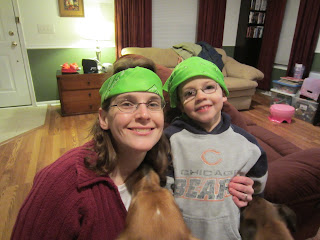 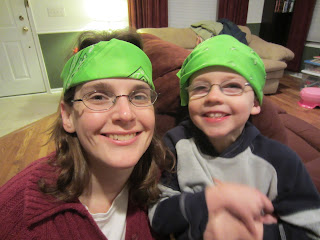 Well, it's been a while since I have blogged.  Not on purpose or anything, we just can't seem to catch a break.  Christmas break came and went.  Ryan used up the rest of his vacation days for the year, and we had plans to take the kids to the museums downtown, show Noah Sue the Dinosaur, do some fun stuff together as a family.  Things don't always work out how you plan though.  On December 22, we were at my sister's house decorating Christmas cookies (Jaime and my mom had cut out over 150 cookies for all 5 kids to decorate- insane!), and towards the end of the night, Ryan turns to me and says, "my throat hurts".  My throat had started to hurt too, but I had been trying to ignore it, because just a day before I had threatened my classes with, "if one of you gets me sick for Christmas break, I'm going to give you an F on your final exam" (of course I wouldn't really do that, but they thought it was funny anyways).

The next morning, Ryan and I woke up miserable.  On the way home from church, Ryan stopped and picked up a bunch of sinus and cold and flu over the counter stuff for the 2 of us, and then just on a whim, picked up some cough medicine for Noah and Juli.  Things progressed, and as it turned out, I had it the worst, then Ryan, and then the day after Christmas, both kids woke up with it.  We had the respiratory flu at our house, and let me tell you, this flu bug is tough to shake.  The four of us were sick for basically the entire 2 weeks we were off, with me still being sick when it was time for us to head back to school.

I finally felt better about mid-week that first week back at school.  Ryan was, of course, out of town for the entire week.  That should have tipped me off on how the week was going to go.  On Wednesday, Juli woke up with a fever and said she wasn't feeling good (she never says that- ever).  It was way too late for me to call in sick, so I gave her Tylenol and sent her to day care (worst mother ever, I know).  I did check on her and she was running around and playing like a crazy lady.  I thought we had gotten through the "worst".  I was wrong.  On Thursday, right before we had to pick up Noah from school, Juli threw up all over herself and the floor.  I cleaned her up fast and then we booked it to make it to Noah in time.  I was hoping it was just a fluke.  After we got home, Juli proceeded to vomit every 45 minutes, and most of the time we were able to make sure she hit the garbage can, but I still was doing a lot of laundry.  I called in sick and after both kids went to bed I wrote my sub plans.  Just as I got into bed, Juli started to cry and call for me.  She had thrown up in her bed.  From that point on, until 3:30 AM, she threw up every 30 minutes.  About 50% of the time she gave me fair warning, so I could make sure I got the bucket, but we went through a lot of towels (I laid those over her pillow and sheets so I didn't have to change them every time), and I moved her to my room since we still have a toddler mattress and she could sleep on the floor next to my side of the bed.  I don't even know where the vomit was coming from, because I cut her off of food and liquids at 5 PM.  After 3:30, she let us sleep until 6 AM and then the vomiting began again.  Our washing machine got a workout.  I can't wait to see the water bill.  Around 11 AM, Noah said his head hurt, and then he threw up.  So, I called him in sick as well.  Fortunately, Noah only threw up twice and then just had the dry heaves with his sister for the rest of the day.  Ryan arrived home late that night- isn't that how it always works?

Last week, Ryan was home for the entire week, and things went fairly smoothly- minus the stomach flu hitting me at school (that was magical).  I got caught up on the sleep that I had been deprived of from when Juli was sick, and the kids were healthy again.

Today, we are off because of MLK day.  Because we didn't really get to do anything "fun" over Christmas break, I was going to take the kids to the Jump Zone in the morning for some fun in the bouncy houses.  Normally, Ryan also has this day off, but of course, he flew out yesterday afternoon for a trip.  This morning, Noah came and woke me up because his "chest hurt".  He was wheezing and had a bad cough.  Ironically, he was fine yesterday and today he is sick as a dog.  So, we spent the morning in the pediatrician's office while Noah did a breathing treatment and we got some medicine & some other meds so I can do breathing treatments with him at home for the next few days so he doesn't get bronchitis or pneumonia.