So back in March, I was watching the WGN morning news (I love them because they don't take themselves seriously just like me), and Dean Richards was announcing that the Ravinia had released it's list of artists for the summer season.  I listened to him read off the names just to listen.  I had been to a concert at the Ravinia a long time ago when a co-worker and friend of mine had an extra ticket at the last minute (for free), and it was a great experience, but expensive.  Then, I heard him say, "Josh Groban".  Now, if you haven't heard Josh Groban sing, you must be living under a rock (just kidding), but you need to listen to some music, because you are missing out!  Even my kids like to listen to him.  Their favorite song right now is Brave.

My conversation with Ryan went like this, "So...I have an idea of something we can do for our anniversary (we usually just do dinner and a movie if we do anything)."  Ryan: "Oh yeah? What?"  Me: "Josh Groban is coming to the Ravinia to do a concert.  We could get tickets.  Not to sit in the pavilion, because that will cost like a bazillion dollars, but to sit on the grass and listen and have a picnic dinner."  Ryan: "That's an idea."

Later at work, I got an email from Ryan that said the tickets were reasonable for the lawn, but they didn't go on sale yet and how about asking my parents and sister and brother in law if they wanted to go.  They were all in.  The morning that the tickets went on sale, Ryan got up early to order them.  He was able to get us 6 lawn seats, and the concert sold out quick.

On August 10th, we met at my Dad's work to head to the Ravinia.  All of us had packed food to share.  We had received an email saying arrive early because they were expecting a crowd, so we did.  We were lucky and found free parking close to the Ravinia and were like 12th in line to enter the park (yep, you had to stand in line to stake out your piece of lawn).  About 15 minutes before the gates opened, my dad told me to turn around and there was a sea of people behind us.  Bill (my brother in law) was pulling this wagon that had a mind of its own, and I worried that he might get trampled.  The gates opened, and my long legged sister took off weaving through people with my mom behind her.  I gave the wagon a push to get Bill a start and followed after them.  Jaime found us a good piece of lawn, whipped off her chairs and started staking out our territory.  My mom followed suit and when I caught up to them I also helped.  Bill made it to us unharmed and we set up our camp and began our evening of gluttony.

As the evening continued, people flooded the park and the sea of people really turned into a sea of people!  At one point, I looked behind us and I was like, "hey, I know that guy!"  It was my friend and co-worker who had taken me to the Ravinia for free the first time and his girlfriend (what are the odds that I would run into him there?).  He told us that one of the security guards said that there were over 13,500 people there!
﻿ Finally, the time for Josh to come on stage came.  He is one of those performers whose voice isn't changed in the studio.  It is as amazing in person as it is on my iPod.  We did weave our way through the people to the Pavillion to "see" him before it got dark, and he was really there :-) 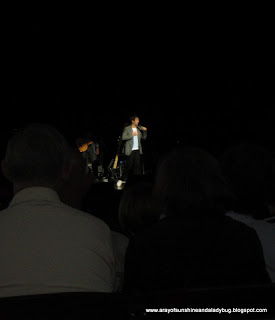 It was so cool to sit there an listen to him!  He is a big goof ball, funny and down to earth.  He ran out into the audience to give a hug to one of us "lawn people" hanging out by the Pavillion who had a sign that said: Josh, can I have a hug?  He also answered questions that we could post on facebook. I took some videos, but the only ones I'm using were taken by the people who sat under the Pavillion, because mine you can only listen to him (which I'm fine with).  He ended the night with his best known song, which if he hadn't sang, Bill would have cried, I think.

Anyway, it was a fantastic anniversary present from my wonderful husband of 14 years.  Thank you, Ryan!

Back in July, my sister Jaime, and I decided that we were tired of not being "in shape".  We really wanted Ryan to be our trainer and tell us, "Don't eat that, fatty!" because we love food.  Ryan said that that was a bad idea.  So then Jaime said, let's just do it through My Fitness Pal.  I agreed, and then we got our mom in on it too.  The 3 of us have been working out and logging our food for just over 20 days now.  I haven't stepped on the scale again, because I really don't want to, but I can see a difference in my body.

Jaime has gotten me addicted to 2 workouts: Insanity and TurboFire. I also have added into the mix, Bob Harper's various DVD's, and he enjoys kicking my butt as well.  1 or 2 days a week, I also run.  Yesterday I ran.  It was a really good run.  I stretched first and then I ran.  I was faster than I was last week, so I ran just a tad further than my usual 3 miles- not much further, just a little.  I stretched when I got home, and then I iced my low back like I usually do.  After my shower, my low back had this ache in it, like the last time I hurt it.  I stretched again and iced again.  Then, we went to the campground where Ryan's parents are staying in their 5th wheel to hang out with everyone.  My low back was hurting more and more.  By the time we got to lunch and had finished, I needed help getting up from the picnic table.  I knew that was a bad sign.  Ryan drove me back home & dropped me off and I called our chiropractor who was able to get me in.

After he examined me, he determined that I had herniated a disc in my lumbar region and that I had sprained my SI joint, which was why I was having difficulty getting up to stand.  With all of this, the muscles around the disc were in spasm, so he hooked me up to a machine that stimulated my muscles for about 15 minutes.  I'm not going to say it was enjoyable, but on a scale of 0-labor pains, it was about a 5.  After that, he adjusted my sacrum and hips for about 15 minutes, and when he was done, I was able to stand without pain.  He then showed me a couple exercises to do at home until I returned the next day (today) for another adjustment.  He also told me to "ice, ice, ice", which I had expected and had some ice packs sitting in a cold bag ready for the drive home.

Today, everyone is going to Starved Rock to hike.  He told me not to go, as that would be bad on this injury.  So I get to stay home and do my cobra exercises and leaning against the wall stretches (that one makes me want to put my fist through the wall because it hurts a lot) and ice, ice, ice in between.  Sounds like fun, doesn't it?  Not really.  I'd rather be hiking at Starved Rock- Ryan and I love to go there.

Hopefully, today's adjustment will go well so that I can go out with them tomorrow and maybe be back to working out later this week or this weekend, because I'm a bit twitchy today.
Posted by Jenna at 10:53 AM 1 comment: