Today my baby girl turns 9.  Honestly, I can't even tell you where the time went.  The first 3 years of her life were spent in the car going from this Children's Memorial appointment to that Children's Memorial appointment to the Rehab Institute of Chicago and in between all of that we managed to squeeze in all her Early Intervention therapies: speech/feeding twice a week, physical therapy, and occupational therapy.  At the time it felt like it would never end and we would always be living from one appointment to the next.  Then, Juli started preschool and then Kindergarten and things started to get easier...and then harder again as they always tend to do...and then easier again.  Currently we are sitting in the middle of easy and hard.  Juli is almost ready to graduate from OT- what will we do with our Saturday's?  We have been doing OT since Juli was 1 year old, and to think that she is about to graduate from it is so exciting to me!  But this isn't a reflecting blog entry today, this is a birthday blog entry so let's get on with it! 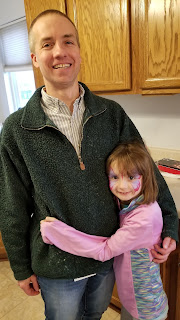 10) This year you were determined to grow so that you would make the height requirement for the high dive at the pool, and at your doctor's appointment on Wednesday, you found out you just passed 4 feet, which is the required height- bring on summer!

9) You couldn't wait to be in 3rd grade this year, because then you were old enough for Girls On The Run.  You have loved running after school (she must get that from her dad) and are looking forward to running the 5K on Mother's Day weekend with me.

8) The first time we had warm weather, you got on your princess bike and noticed immediately that it was too small for you.  "Mom, this bike is built for a toddler!  Can I get a new bike for my birthday?"  We went to the store last weekend and you picked out a nice and "purpley" bike that had pegs like Noah's so you can ride with us at the bike park. 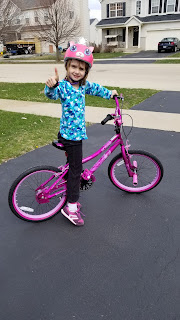 7) You have your Aunt Jaime and Uncle Bill wrapped around your finger.  When you spent the night at their house, you convinced them to get you 2 candies to eat during the movie... And let's talk about the movie... you convinced them to buy Jumanji.  When it was time to go, you were able to convince Uncle Bill to carry all of your stuff to the car because you were eating a sucker!

6) Just like your brother, you are also obsessed with the soundtrack from "The Greatest Showman".  For months it was all that you would listen to, and now that we own the movie, we have watched it multiple times.

5) You know what you want and when you want it.  Back in February you decided that you were done having long hair and that it was time to cut it off.  No one could persuade you otherwise.  You didn't even blink when the lady at Great Clips cut off 5 inches of your hair.  If I would let you go shorter, you would go shorter. 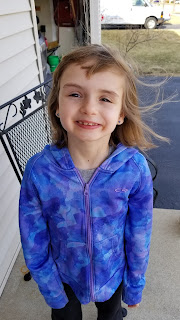 4) You love to help in the kitchen, it doesn't matter who you are cooking with.  When we were in Arizona in December, you were always close to Grammie helping her with whatever she was making in the kitchen. 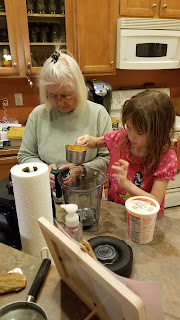 3) This year after your IEP meeting, I told you you didn't qualify for ESY (I should have never opened my mouth), and you were so excited.  However, in February after I received the email from school that you had regressed and they were now recommending you for summer school, you took the news in stride.  You may have shed a couple tears initially, but then you were okay with it.  You even were okay with me driving you instead of riding the bus, since you had to be up so early for the bus last summer.

2) You still love to wear your costumes.  Maybe not every weekend and maybe not to church every Sunday like you used to, but there are some weekends when you will dress up in one of your princess costumes for the day.  I will be sad when you stop doing that altogether. 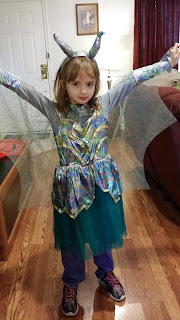 1) You love your brother so much.  When Noah got released from the hospital on Halloween and we both showed up at school to pick you up, he was the first person you hugged and you didn't let go for the longest time.  That is one of my favorite memories. 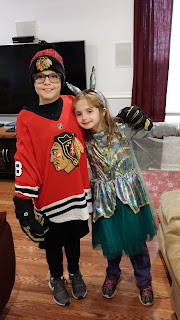 Juli Rose, you are growing into a beautiful, brave, warrior princess.  We love you so very much!  Happy Birthday, punkin horsie!