This year was Noah's first time going "trick or treating" for Halloween. Last year he didn't really seem interested and helped me hand out candy. This year, I started talking it up the weekend before Halloween. He wore his costume most of the afternoon on Sunday, and we practiced saying, "trick or treat" and "thank you".

After his nap today, Noah was ready to get in his costume. It was cold and windy, so I layered on his clothes, starting with long underwear, a turtle neck, and then his Winnie the Pooh costume. Noah was so excited. We (Noah, myself, and Grandma Vicki) started at our neighbors house, and he said, "We trick or treatin! Thank you!" Each time we left a house, Noah said thank you and took off running to the next house. We hit more houses than I thought he would want, but when we got close to home, I asked Noah if he wanted to do more houses and he chose to go home. Then he helped Daddy and Poppa Jim hand out candy at the door.

Here are some pics of my little boy and little girl (who stayed inside where it was nice and warm). 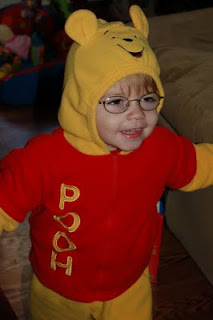 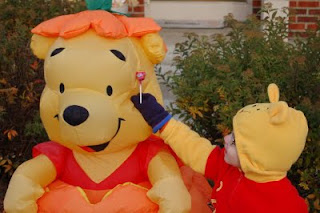 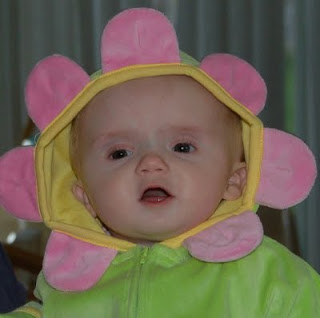 Isn't she adorable? What a cutie pie!
Posted by Jenna at 7:54 PM