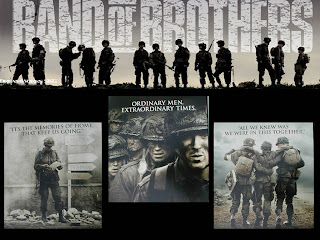 My dad is also very much into World War II. In fact, he has actual pictures of the bombing of Pearl Harbor, framed and hung on the wall. My dad's uncle worked for an admiral of the US Navy, which is how my dad got the pictures. His uncle was able to pull strings to get my grandfather pulled off of a boat heading to the Pacific and stationed in Honolulu instead of being shipped to Guadalcanal. When I was in 5th grade, I did a project on Hawaii, and my dad allowed me to bring the pictures to school as part of my project. That's how I first became interested in World War II.
When Jaime and I were younger, and living at home, our parents would take us to the Mariott-Lincolnshire to see different plays. We saw Peter Pan, but my favorite was South Pacific. I love reading about World War II, and that's a common link my dad and I share. This year, Ryan was gone over my Thanksgiving break, and I was disappointed that we wouldn't have our marathon watching of "Band of Brothers".

My dad found out that "South Pacific" was coming to the Rosemont Theatre, and got 2 tickets for the two of us to go see it. Needless to say, it was AMAZING! We went to the Saturday matinee, and had really great seats. The man who played Emile Debeque was a well-known opera singer, and I honestly don't think he needed to have a mic on him. I could have listened to him sing forever. Since we went to the matinee, we were surrounded by many older people (like my grandma's age). It was interesting listening to them talk about their memories of World War II. A younger lady mentioned that her father was stationed on the USS Arizona, and had gotten shore leave the morning of the bombing of Pearl Harbor, and was unable to get back to the ship before it was sunk. She said he was never the same after that, and felt guilty that he didn't die with the rest of his "brothers".