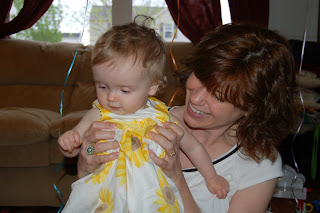 I know that all of those seem trivial, no big deal, but to our family these are huge stepping stones for Juliana to cross. When we started with Miss Peggy, feeding Juliana tub foods was a disaster, and getting her to drink was a battle. Miss Peggy introduced us to the vibrating spoon- called a Z-Vibe. With that magical spoon, Juliana began to open her mouth to take the food on the spoon. She also introduced us to the vibrating alligator which also served to get Juliana to open her mouth.

Miss Peggy also told me about Early Intervention when the doctor told us that Juliana needed multiple therapies. Peggy supplied me with the number to get the ball rolling and then once the ball was rolling, she advocated for us. She was able to be one of our evaluators, and was able to write Juliana's paperwork the way it needed to be written to get us the help we needed. She followed up with our coordinator to get the paperwork pushed through to get Juliana's program started so she could see her 2 days a week. She was even able to get Juliana's Physical and Occupational Therapists from the company she is currently with.

Today was our last session with Miss Peggy. She is moving on to branch out on her own. I mentioned in an earlier post that when she had told me, I cried the entire way home. Today was not much different. I, again, saved my tears for the drive home. I never realized how attached I had become to our speech therapist. I did get to meet her replacement and she is a very nice lady, but Peggy is leaving some big shoes to be filled.

If you are looking for a speech therapist, I highly recommend her. You will get results. Thanks, Peggy for everything. You have made a difference in our little girl's life, and we appreciate it. 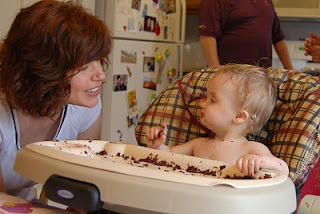